For some individuals, money really isn’t a problem. In fact, either they have been born into money or they have made lots of it working or investing. Regardless, people who have money learn to appreciate spending it, and their homes are one of the first places where extravagant sums of money are going to be spent in order to create luxurious living accommodations.

Therefore, creating extravagant home improvements is a popular pastime. It is an easy task that is probably just as rewarding as it is expensive. When you are rich, though, money is no object and all of the home improvements in the world are readily accessible for a few million dollars.

All too often, celebrities buy a home for millions of dollars only to wait one or more years as extravagant renovations are completed according to their specifications. In some cases, these celebrities purchase a home that already has several million dollars worth of extravagant changes incorporated inside and outside of its walls, so adding a few more expensive renovations should fit right in.

Take Jennifer Aniston who purchased a huge Beverly Hills mansion for only $13.5 million in 2006 and then decided she needed to completely renovate it. She added a Koi pond in the entrance hall, professional catering kitchen (that is hidden by the primary kitchen), a Japanese spa, and extravagant pool with a cabana. Perhaps the most intriguing and unexpected renovation is the Koi pond. How would you like to be greeted by a few gorgeously golden Koi as you entered your home? In 2011, Aniston placed the mansion on the market with a $42 million price tag because as Jennifer puts it, the mansion was “too much” for her to manage. Maybe she tired of hanging out at the pool and planning huge parties so she could take advantage of that catering kitchen.

Sports personality Scott Farrell not only wanted a “man cave,” he wanted an incredible one complete with all the bells and whistles. He recently had a lower-level room remodeled into a sound proof work station/ home studio. He had all of the proper equipment he needed to work over the air installed including an “ONAIR” sign and an in-the-wall fish tank. Plus, he had a large interior window installed so that he can keep an eye on the kids while he works. 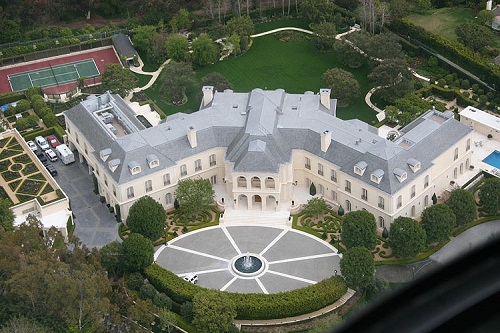 If you have children or a large family, then you may want to pick up a few tips on home remodeling from the Spelling family. Not only does the mansion, originally owned by Aaron Spelling, have its own tennis court, a home feature that has become quite commonplace, but it also has a bowling alley, several swimming pools, and a skating rink. If your family can’t find something enjoyable to do there, then they might just be in awe of the millions of dollars that have been spent there.

Perhaps you might be interested in a celebrity mansion that has everything except a mall or marketplace? However, there is always online shopping and take out for dinner. Chris Paul, an NBA star, recently purchased singer Avril Lavigne’s mansion. Lavigne originally purchased this luxurious mansion from Travis Barker, Blink-182’s drummer. This home has it all – rooms for play, rest, work, workout, and more. The home includes not one but two offices, a gym, and a garage built to hold ten vehicles. For relaxation, residents of this mansion get to enjoy a pool, spa, and wine cellar. The backyard even has its own covered living room! Plus, the master bedroom is like a small studio apartment complete with kitchenette, dual baths, and huge closets.

There are numerous ways how to spend your money and remodeling and home improvement is just one of many.

Author’s Bio: Guest post contributed by Christine Harding on behalf of Wish Experiences. Christine is a married and spends a lot of her time travelling and writing about luxury destinations and celebrity gossip.