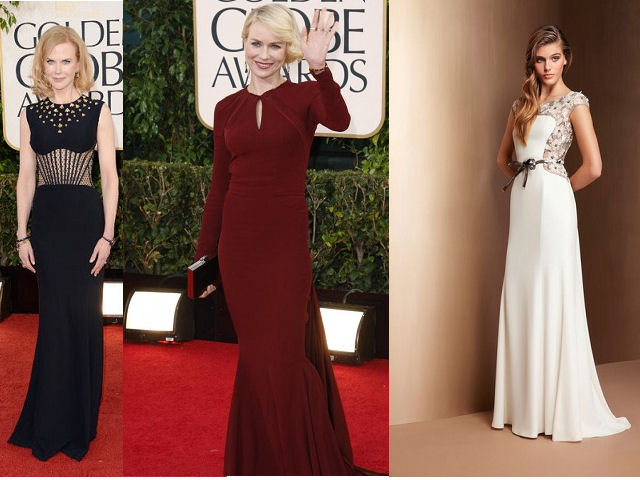 Celebrity Dresses vs My Suggestions For Golden Globes

Yesterday, before watching celebrity girls arrive on the red carpet for Golden Globe Awards 2013, I have picked a few dresses that I wanted some nominees to wear. And although no one was wearing something that I have chosen (no surprise here), it was a great fun to compare my choices to the actual celebrity dresses. So, here are the celebrity girls in their Golden Globes dresses vs my suggestions.

Naomi Watts in Zac Posen and Nicole Kidman in Alexander McQueen vs Escada dress that I picked. Both ladies look gorgeous in the dresses that they picked for Golden Globes red carpet. What do you think? Jessica Chastain usually looks amazing on the red carpets. Last night I think this Calvin Klein dress was not the best choice. I didn’t like it at all.

Rachel Weisz in Louis Vuitton vs Carlos Miele black evening gown.
I really hated this dress Rachel were wearing at Golden Globes 2013. My pick for her is way better. I think that Sofia Vergara actually has chosen the better dress that I picked for her. I love her in Michael Cinco dress, she even made it to the 6 best golden globes dresses list. Somehow I don’t like this dress by Alexander McQueen on Michelle Dockery. It makes her shoulders look broader than her hips, which is not good. I personally prefer Oscar de la Renta dress on Michelle. I usually love everything that Michael Kors produces, but this dress is not the best of his creations. Or maybe Emily should have decided on another dress. She would look stunning in Carolina Herrera, for sure. Well, I can’t say that I hated the Dior dress that Jennifer Lawrence was wearing. But I definitely was annoyed by the top of this dress. It looked weird. The rest was perfect, like from the waist down. So, maybe Badgley Mischka dress would not be that bad of the choice for Jennifer.

Anne Hathaway in Chanel vs my flirty pick by Versace. I thought that Anne Hathaway’s Chanel dress was a little bit too simple to my taste. I understand that she was very comfortable in it, but maybe Anne could have chosen something more flirty for Golden Globes 2013 red carpet.

So, it is actually fun to compare the dresses I picked vs the actual gowns that celebrities have chosen to wear to Golden Globe Awards 2013 red carpet. I must say that mostly I prefer my choices, ha-ha. What do you think, rich girls?